Thank you for stopping in to read my #fridayflash. Be sure to visit the Friday Flash Community for more great flash fiction by outstanding authors!

The Package is rated PG by my standards.

The Package, by Deanna Schrayer

Jack bit the tip of his tongue and stared at the cursor blinking on his screen. His eyes crossed as, over and over again, he read the one sentence he’d typed: Orangebeard sprouted his wings and flew across the ghost ship, raising his machete as he took aim at his enemy….

“This is so boring!” Jack thought, “What does this guy want me to say? Who is his enemy? What is Orangebeard’s story?” After rubbing his chin stubble almost off, Jack pushed the laptop away and threw his hands up in defeat. “What makes me think I can write?” he asked the air of his kitchen. He lit a cigarette and stepped outside. He’d walk to the mailbox, clear his mind for a minute.

As Jack neared the end of the driveway he saw a package setting beside the mailbox. It was so big it looked as if it should have been delivered to the zoo instead of his little trailer. The only thing he’d ordered was a book on writing query letters; surely it wouldn’t come in such a huge box. He tossed the cigarette butt in the ditch and stooped in preparation to heave a massive weight. But the box wasn’t heavy at all; it didn’t even feel like it could contain a book, much less something worth the trouble of such an awkward shipment.

Jack balanced the box on his shoulder and jogged back inside, curiosity growing like a pirate’s treasure. He placed the box on the kitchen table, grabbed the scissors and sliced the seam open. Inside was a treasure chest, one of those cardboard deals like you get at a party supply store for a kid’s birthday.

Feeling a bit cautious now, Jack checked the outside of the box. No return address. He took a step back and stood staring at the dull gold chest, unease creeping up his stomach into his throat where it lodged in a tight knot. “You’re being ridiculous, Jack,” he told himself, “It’s just a kid’s toy box, nothing sinister about it at all.”

He pushed his fear aside, barked a short laugh at himself and opened the chest. It contained an eye patch and a scroll of yellowed paper, torn and burnt around the edges, bound with a piece of frayed rope. A treasure map? He untied the rope and a note rolled open. 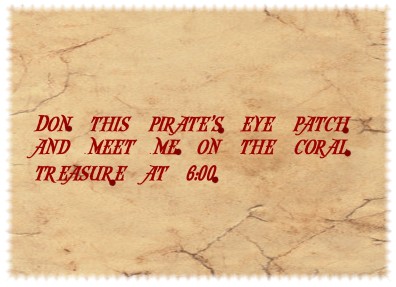 Jack saw no ‘X’ marking a spot, (or any spots for that matter as it was not a map, just the short note). He scrunched his eyes up as if that might help him understand who the note was from. And it did – he remembered. Captain Delaney, the sailor he’d asked to interview a couple weeks before. Jack recalled him seeming eccentric, but he hadn’t realized the old man was going senile.

He glanced at the clock – if he rushed he could make it. He grabbed his keys and voice recorder and ran out the door, then rushed back in and got the eye patch. He jumped in his barely-still-yellow Volkswagen and headed for the marina.

As Jack parked near the dock it began to rain. A rumble of thunder rolled across the darkening sky. He glanced around before putting the eye patch on; he could just imagine the razzing he’d get if one of his tavern buddies saw him. But there was no one around. No one at all.

Jack stepped onto the deck of The Coral Treasure just as the sprinkles mutated into colossal drops of hail that stung his bare arms like sharp wasps. Thunder boomed louder now and the sizzle of lightning came closer and closer. Jack held his arms out for balance as the wind picked his cap up and sent it sailing into the tall waves slamming the boat. The hair on his neck stood to attention, a cold chill scampering across his bones.

“What’s the matter with me?” he thought, “This is just an interview for Pete’s sake.” But his steps were slow and cautious.

“Come on in Jack!” a gruff voice rebounded off the cabin walls. It had been a couple of weeks since Jack had talked to Captain Delaney on the phone, but he didn’t recall him sounding so…lively.

Jack walked through the pitch black corridor holding on to what he hoped was rails on each wall as the vessel rocked beneath him. “Thank you for taking the time….”

It was more than the thunder that stopped him cold.

“I’ve been waiting for you, Jack.” The man smiled, his beady eyes almost disappearing beneath thick crinkles of gleaming fat flesh.

Jack stood agape, shivering as he stared at the giant before him, the very monster he had created himself. Orangebeard.

The pirate stomped into the trembling candlelight, and Jack realized where the thunder had been coming from. “I’ve been waiting….and waiting.”

Jack froze, yet sweat popped out on his forehead like glittering beads of mercury. He grew faint.

Orangebeard sprouted his wings and flew across the ghost ship, raising his machete as he took aim at his enemy….

To subscribe to This Side….Over Yonder look to the top left corner of this page; there are different methods of following, choose the one that’s right for you.

Open your mind, open your heart and open your mouth. I love hearing from my readers so please leave a comment. Cancel reply

Stories and Musings by Deanna Schrayer

Who is this woman?

Deanna’s all over the place!

Join me on Facebook and Twitter, (Deanna Schrayer) and on Flickr, (dmschrayer) Scroll to the footer for my blogroll, including fellow Friday Flash authors, writerly places and family resources.

Seek and ye shall find

What do you want to talk about?